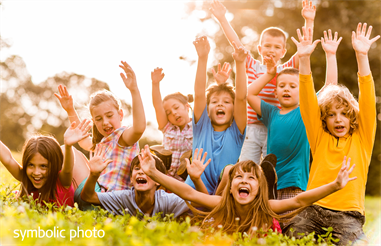 5-year-old Lena suffers from a mild form of upper limb spastic cerebral palsy on the right side. From the beginning she was willing to undergo a multi-channel electrostimulation treatment of the right arm and hand.

"She was especially interested to see the progress when being regularly stimulated (every 2-3 days for 20 – 30 minutes over 2 months). Soon we, her parents, had the impression that, in order to open her fingers, she no longer had to bend her wrist to such an extent compared to the beginning. Moreover, her arm and hand movements generally appear to be more natural and controlled. The complete arm appears to be a bit stronger. When playing, she now also uses her right hand purposefully and more actively. Compared to the beginning, her upper arm muscles are better toned and obviously firmer.

She was able to use the acquired functions in kindergarten during gymnastics on the rings, which had an additional training effect. Her strength and stamina have significantly increased. At the pool, for example, when climbing the net hand over hand, she can now use both hands alternately to grasp and climb. Before, when trying to hold herself with her right hand, she had to use her left hand to support the right hand."

The products are subject to approval by the national competent authorities and may be currently unavailable or not offered for sale by MED-EL in your region. Please contact stiwell@medel.com for further information.